The bikes parked around Ann Arbor

Spring is great. The sun starts to come out, the birds chirp, the air warms, and the glaciers retreat from the streets. And with the warmer weather come all the cyclists emerging from their hibernation. Ann Arbor has a growing community of cyclists and people who happen to have bikes (I make a distinction, even if it sounds snobby). I was downtown today and snapped a few pics of bikes parked on the streets. I'm always fascinated by the variety of bikes you can find parked around town. I'm an advocate of using a separate bike for doing errands and parking in public spaces than the one you use for sporty activities. I'm working on an old beater right now (future posts will elaborate). The idea being that you have a cheap, safe (and probably real old) bike to ride that you won't get too upset about if it gets stolen or vandalized (unlike if the same were to happen to your carbon road racing bike). That being said, I think there's a limit to how bad a bike I'd ride. For example, I was pretty surprised by the amount of rust in drive trains I saw while walking about. 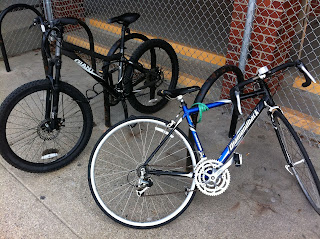 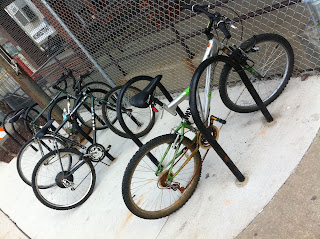