Worn Chain Blues - Don't let this happen to you!

Took the bike in to the shop to get some work done on it. Got the bottom bracket and hubs cleaned and lubed and all sorts of other smaller stuff done. It's amazing how much faster a bike can get after such simple maintenance. I also wanted them to look at my rear derailleur because it was acting a little funky. In the smaller and larger gears it would sort of skip up and down a little bit. Not a whole lot but enough to be noticeable.

The bad news
I had worn the chain so much that it had stretched out and each of the bearings was spaced out just a little bit more than they were supposed to be. Because of that the chain had gradually worn down the gears I use the most on the cassette. The solution: replace both. Ouch. A simple tool that gauges chain length would have alerted me to this problem before it became expensive. I have learned a lesson.

The good news
Despite being stupid enough to allow it to happen, I can now feel like a hardcore cyclist. I rode so much that I literally wore my chain out. Just how much, you may be asking? 2,780 miles. Not too bad for a noob. This distance also happens to be the distance between Los Angeles and New York City. That's about 143,225 calories burned, or 241 Vito sandwiches from Jimmy Johns. MMmmmmmmm... sandwiches. Or 6,510 marshmallows! Or 5.5 gallons of Nutella! I could go on like this all day.

Having a worn out chain gave me the opportunity to practice with the chain breaker on my multi tool and make a super sweet trophy bracelet. I had to clean the holy bejeebers out of it before it was wearable (turns out that 2 years of dirt and grime don't come off all that easily). 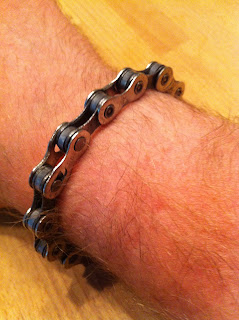 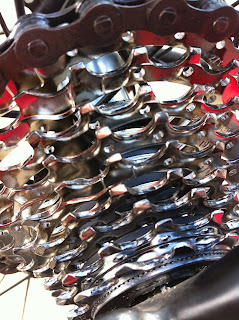 The cleanest that chain and cassette will ever be.