A note from Joe: On August 19th three Speedy Chubs took part in the Steelhead Half Ironman as a relay team. Debbie swam 1.2 miles, I biked 56 miles, and Dan ran 13.1 miles. This is part two, the bike, from my perspective. Part 1 can be found here. 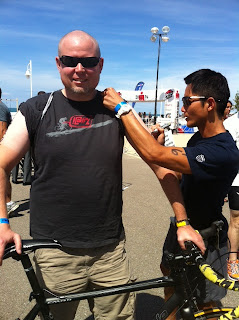 Somehow I had managed to sleep well, but 5am was still early. I crammed down some breakfast and pulled on my cycling gear. The rest of the team got their stuff in order as well. Our quiet group went out to the cars and drove to the race site. It was pitch black out. As we arrived at the crowded parking lot I was very glad I had dropped my bike off the day before and that we had all done the body markings early. All we had to do was drop my gear off and then walk Debbie to the swim start. The shuttle bus from the parking lot dropped us off near the transition area, but waiting for us, just across from the bus, was a large van-turned-coffee-shop. The folks at Bear Claw made us very happy. Three coffees and a dropped off helmet and cycling shoes later, we were on the beach walking to the swim start. We walked. And walked. And kept walking. It was at this point that I appreciated how far 1.2 miles of swimming would be. It was also when Dan gave Debbie the "don't die" pep talk. You see, Dan figured he could twist an ankle, I could possibly crash, but Debbie could actually drown. I'm not sure how effective his pep talk was, but we both thought at that point that Debbie had the harder of the three legs of this race. Oh, and did I mention that we were all wearing sweaters because it was 60 degrees out? I know the last thing I would have wanted to do was jump in the frigid water of Lake Michigan with thousands of other people. We sent Debbie off at the start and made the walk back to the transition area.

Arriving at the transition area we noticed how few people there were around. We had the place nearly to ourselves. Need to use the restroom? No lines. Need something to eat or drink? No lines. This made sense because the only people around were spectators and the very few people doing the event as a relay. The rest of the 'real' athletes were busy floating furiously and fastly to the transition area.

I got myself situated in the relay racer pen along with a handful of other racers. Then I waited. There were people constantly running up the beach, but they were all from the previous waves. Then people from Debbie's wave started showing up, so I started looking for purple caps (each wave had its own color swim cap). A man, looking ghost white, hobbled up the beach, leaned over the fence at the transition area and regurgitated his probably-not-well-selected-or-timed-breakfast and then lumbered into the transition area in search of his bike. The fact that someone had just barfed less than 3 yards from me was not quite as disturbing as how nobody seemed to think this was a noteworthy event. Then suddenly some woman was shouting at me. It was Debbie! She had taken her swim cap off so I didn't notice the purple. I've worked with Debbie in an office setting for over a decade so it's amazing I nearly didn't recognize her in a wetsuit with flattened out wet hair and an amazingly exhausted looking expression on her face. I grabbed the wet, sandy timing chip band from her, yelled that Dan was "just over there" and then ran to get my bike.

The transition area for Steelhead is rather long and I was on the extreme opposite end of where the biking started. It took me a full two minutes of 'running' (I say that in quotes because it's not quite running when you have bike shoes with cleats on) with my bike to the start line.

Away I went. Sometimes you hear road bike racers talk down about triathletes and USAT style bike racing. This race is different from a road race because, at least by the rules, you're all supposed to be in a single file line with at least four bike lengths between each rider. The only time you can be in the draft zone, or next to a rider, is during the 20 seconds you are allowed to pass someone. "What if the person you're passing speeds up so you can't pass them in 20 seconds?" someone asked at one of the athlete meetings. "That's called racing", was the response. Indeed, racing. Something I'm rather new at. I've done plenty of biking before. Lots of long distances, and I've biked 'fast'. But I've never biked in an event where my goal was speed rather than just completing some very long number of miles.

The early part of the course had a lot of sharp angled turns before we got on a stretch of long road. This is when I noticed that I could pass a lot of people by taking the turns as if I were racing in a road race. You see, most people took the turns as if they were driving a car. They stayed in the far right of the lane, slowed way down, turned right at a complete right angle, then sped back up. I started the turns as wide left as possible, cut the corners sharp and exited a little wide. This longer arc allowed me to maintain most of my speed, slingshot past a few people, and feel smug and overconfident. It may have even shaved off a whole two seconds from my final time. Maybe.

Then the long haul began. I was going at a pretty good clip, but it was cold out and I was feeling good. The pace was fast, but it felt sustainable, so I went with it. I was ascending hills at paces faster than I had expected my average pace to be. I was going fast. At around 25 miles into the race the weather changed. The sun came out and all of a sudden it went from 65 to 80 degrees. This is about the same time I realized I had made the mistake of not keeping up with my hydration. The cold weather and the race time excitement had conspired against my brain and made it forget to pick up the water bottle as frequently as I should have. Then around the 35th mile my back started aching. This sent my mind reeling. When you're giving it all you've got and there's nothing else to think about the mind has a way of fixating on things and blowing them way out of proportion. I slowed way down and overanalyzed the situation. I'm only just over half way done and my back is in pain already? What if it gets worse? I don't want to go to the ER again. How long would I have to lay on the side of the road before the SAG wagon gets me? Turns out I was just fine. A few miles later I was back to going fast. Then my legs decided they weren't fine. First they started telling me that the pace I was going was not, in fact, sustainable. As if to drive the point home my right calf decided to cramp up. Then after another 10 or so miles my right hamstring cramped up while I was taking on a hill. I was struggling. Each revolution of the pedals was becoming a conscious effort.

It was difficult not to think about the fact that most of the people who were passing me had just spent about an hour swimming before zooming past me. When I get to the transition area that would be the end of the race for me, but for them they'd have to get off and then run a half marathon. This was a very humbling event.

Somehow I managed to get myself to the transition area. I grabbed the timing chip band while pedaling, hopped off the bike and 'ran' to the relay pen. Dan found me quickly and I handed him the sweaty, wet, sandy chip and bid him well. I put my bike away, found Debbie, and hobbled over to the athlete zone to stretch, cool off, and hydrate. I had finished 56 miles in 3 hours and 18 minutes, a new personal record.
Posted by Joe