A note from Joe: On August 19th three Speedy Chubs took part in the Steelhead Half Ironman as a relay team. Debbie swam 1.2 miles, I biked 56 miles, and Dan ran 13.1 miles. This is part three, the run, from Dan's perspective. Part 1 can be found here and part 2 can be found here.

When Joe threw out the idea of doing the Steelhead as a relay team, I jumped at the opportunity pretty quickly.  I run quite a bit and dabble in cycling, but the idea of swimming 100 meters let alone 1.2 miles seems like a terrible idea.  Swimming for me is more of a “oh no, I feel out of the canoe, let’s not drown” sort of affair than a competitive past time.  With that in mind, there is little likelihood of me completing an Ironman event solo but participating in the event and seeing an event of this magnitude sounded like a great idea.

This would be my fourth half marathon (and incidentally my slowest after a long winter of ouch).  I knew I would survive the race but it wouldn’t be a fast time for me.  My biggest concern was the relatively late start for a race (for my leg) in the summer that had been pretty hot.  I did a lot of heat training leading up to the event doing my long runs in 90 degree heat.  I am thoroughly glad that I don’t have to do that anymore.

As Joe and Debbie mentioned, our morning started in the darkness that is 5:00am.  It was actually kind of cold out and I felt for Debbie having to jump into the waters of Lake Michigan.  We drove ourselves to the Whirlpool headquarters and shuttled over to the race start where the mystical coffee truck was waiting with an overly caffeinated young man waiting to perk us up.  Thank you.

Now came the waiting and wondering.  After seeing Debbie off, Joe and I began the wait for her to swim to us for transition.  She arrived shortly after the vomiting man that Joe mentioned and Joe was off.  Debbie extracted herself from her wetsuit and we went off to the Athlete Lounge to wait for Joe’s triumphant return.  This is where the waiting really took place.  Joe’s best guess on his cycling time was somewhere just north of 3 hours.  To me this meant that his finishing could be one of three times.  1) 2:45 if the adrenaline kicked in good and hard and he had the ride of his life.  Joe didn’t really see this an a possibility at all but I didn’t want to miss the relay hand off.  2) 3:00 if Joe’ optimistic goal was met.  3) 3:15 if everything went relatively smoothly and he met his realistic goal.  Joe came in at about 3:15 meeting his realistic goal which meant that I had been standing in the relay pen for about 30 minutes.  Joe looked depleted and had clearly pushed for the finish.  I was off.

I think a picture of my race route is now in order. 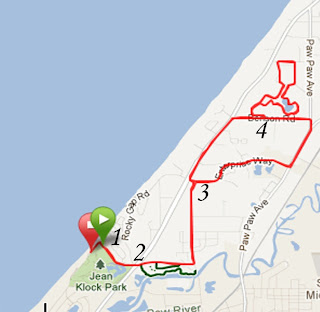 The half marathon race turned into more of a mental challenge than I had thought it would be.  There are four main points I wanted to write about with the actual race, the numbers above are roughly where I was when I was having these thoughts.

After completing the second lap I was on my way to the finish.  A mostly downhill finish made for a decent finish.  Crossing the finish line I was rewarded with 3 relay medals and 3 finishers hats that I gladly passed on to Joe and Debbie.  We then made our way out of the park and towards home.  I dropped Joe and his bike off with his family and then proceeded to the nearest McDonald’s.  Time to live up to the latter half of the Speedy Chubs…