A note from Joe: On August 19th three Speedy Chubs took part in the Steelhead Half Ironman as a relay team. Debbie swam 1.2 miles, I biked 56 miles, and Dan ran 13.1 miles. This is part one, the swim, from Debbie's perspective.


"Dear Steelhead race organizers, Last summer I trained for 14 weeks to take part in your half-Ironman triathlon. You canceled the swim portion of the race due to riptide currents in Lake Michigan. I'm coming back on Sunday as part of a relay team to do the swim leg. Please (please!) don't cancel the swim again this year. Thank you."


I posted the message above on Facebook the day before the race. I’m happy to report that the swim was NOT canceled and I finally had the chance to swim 1.2 miles in Lake Michigan as part of the Steelhead race. It kind of stinks that I didn’t get to have the full 70.3 experience in 2011 after training for so many weeks, but I think I’ll get over it.

When Joe suggested forming a relay team in February, I jumped at the chance. I’ve never done a triathlon relay before, but my 70.3 experience felt incomplete without doing the swim part of Steelhead, so it was perfect.

We showed up for the start of the race on Sunday about an hour and a half early. We got Joe’s gear settled near his bike in transition, then proceeded to walk 1.2 miles to the swim start. Most triathlons start and end the swim in the same location with the swimmers doing a triangle-shape course, but Steelhead is different. Depending on which way the current is going, they either walk the athletes north or south on the beach, then have them swim back to transition.

I stuffed myself into my wetsuit and got my cap and goggles on and proceeded to wait for my wave to start. It was so pretty to watch the sun rise over the water while standing on the beach with about a thousand other people, most of them waiting to throw themselves into the frigid waters of Lake Michigan. The announcer mentioned that we would swim past 16 buoys. The first eight would be yellow, then there would be eight orange ones. I thought that was brilliant.

The swim start was typical, with some people swimming chaotically and others taking right off. I’m not a fast swimmer, but I settled into my stroke fairly quickly. A few times, someone swam up behind me and hit my feet and lower legs before figuring out they were about to swim over me and moving left or right. I was pleased to see that the buoys were numbered so I was able to count 1 through 8 for the yellow buoys then 1 through 8 for the orange ones. I even stopped at the halfway point to check my watch. I was expecting to do the swim in about 50 minutes and I was right on track at the halfway mark.

I train with another triathlete who is in his 60s and we refer to him as ‘Coach Larry’ due to his sage training advice. As I was swimming the course, I could hear Coach Larry telling me to enjoy the race, to stay in the moment.  I tried to enjoy every last moment of the swim and it ended all too soon. Actually, I was pretty darn tired by the time I reached the last buoy and made a right-turn towards shore. I pulled off my purple swim cap and ran the long, sandy path up to transition. I found Joe in the Relay Pen and handed off the timing chip that was strapped to my ankle.

I decided last summer to retire from triathlon after 10 years and close to 20 races. This was a nice ‘last race’ for me and I will remember it fondly. 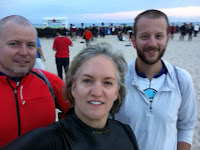 The team, (from left to right) Joe, Debbie, Dan.