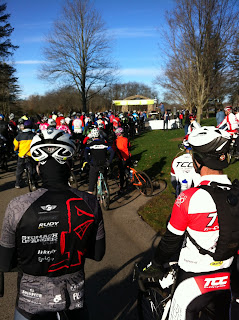 As I mentioned in my last post, I've had a cyclocross bike for commuting and touring but had yet to use it for what it was designed for. So, I did some cyclocross, but I also wanted to do some dirt road riding. The Dirt Road Washtenaw book made an appealing case for some fun riding, so I went for it. It was a lot of fun taking off from my house and being in the middle of woods and farmland within just a few minutes. So, when I found out about the Lowell 50, a 'classic' dirt road race I signed right up.

The overall environment at the race was pretty laid back and everyone seemed to be cool and friendly. The weather turned out to be surprisingly nice. It was only in the 40's but the sun was out and made things feel better. The wind was very steady but not too strong.

I met up with Juho, fellow Speedy Chub, and his clan of racers. We discussed race strategy and equipment while waiting for the start. The first part of the race went through some beautiful wooded areas, but it was rather hilly terrain. It was difficult to get into any rhythm because we were going up and down so dramatically. Then after about 10 or 15 miles the steep staccato of the woods gave way to longer rolling hills of farmland for the majority of the ride.
I brought plenty of nutrition for my expected time and a little extra, just to be prepared. About half way through the ride I realized I was hungry - my stomach was growling. I was eating about 200 calories an hour, so this was rather unexpected. Then it dawned on me that it was lunch time. The race started at 10am and I was not intelligent enough to realize that I would be racing through lunch. I started day dreaming about cheeseburgers. So, my cache of calories in my back pocket went faster than I had planned, leaving me a little low for the last part of the ride.

It was also around the half way point that I met up with a bunch of people who were supposed to be doing the 28 mile version of the race, but missed a turn somewhere and were stuck with having to finish out the whole 50. The markings for the ride were not bad, but they were rather inconsistent. Some intersections were marked so heavily you'd have to work hard to miss the turn. Others had just one very small arrow in a not-so-obvious place. Sometimes intersections that you were just supposed to go straight through were marked, sometimes not. This wouldn't be too big of a deal if there were a lot of racers. But this was a small race and there weren't always a people in front to watch for queues.

Around 45 miles into the 50 mile ride I started noticing that intersections didn't have any arrows. After a while it became clear to me that I was off the course. I had to break down and check the maps on my phone. Sure enough I was off. I plotted a new course and soldiered on. The dirt roads were mostly unmarked with road names and some weren't even on my maps. So, it meant that I had to stop at almost every intersection to check where I was in order to stay on track. 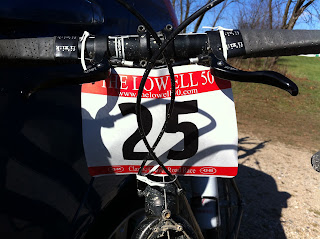 At one point I passed a house and an excited, small dog came out to greet me. This is nothing new for anyone who has done any dirt road riding. However, this dog followed me well past their yard and past their neighbors yard. I stopped to scold the dog and send it home. Undeterred, the dog stayed with me for about three miles. I stopped and talked to a local mountain biker, who told me that my new little friend follows him and his friends for amazing lengths of time too. The local also showed me a very nice, twisty, wooded dirt road to take on my way back to the park where the finish line was. This was not a bad way to get lost.

I made it to the park, but I ended up on the wrong side of the river. So, I had to go to the opposite side of the park in order to cross a bridge to then come all the way back around again. Then, finally, four hours after starting, I crossed the finish line. So much for my goal time.

I'm still not sure what to think of the race overall. It was fun and challenging, but also a little bit disappointing. To say that it was a well organized race would be too generous, but to say it was poorly organized would be too harsh. I had a good time and I don't feel like I wish I hadn't done it.

Find out more about the Lowell 50, from Juho's perspective here, at slowvelo.com.