In the beginning...
I've never really considered myself much of a runner. I've always figured a 10 minute mile to be pretty good and 9 minute miles to be wicked fast. I did my first half marathon at around 13 minute miles. But something happened this spring: I learned how to run. It sounds kind of silly to say that. Everyone knows how to run, how did you not know how to run? Working with The Coach, I found out I was running in more of the classic heel striking forward form. The Coach got me running with mid-foot striking and a higher cadence. It felt really weird and even silly at first. Then it felt quite natural. Especially at high speed.

The Coach tries to make me barf
Over the spring and early summer The Coach worked me up to a base run of 6 miles in one hour. Then Coach started in with the speed training. One especially memorable session was when he dragged me through Gallup Park for a 5k time trial. The purpose was to make me go as fast as my body could. The goal was not to make me barf, but he warned that could be one of the side effects. It nearly, but not quite occurred. Sounds fun, eh? Sessions like that turned out to be quite valuable though, because I learned my thresholds and how to read them.

I shall race
Training for the Steelhead 1/2 Ironman continued and it was near time to do another time trial, but in 10k distance. This time I found a race in a small town near the In-Law's cottage, where we were staying over the 4th of July. The Coach Kelly Race is a small, local race put on, presumably, by someone named Kelly. While everyone at the cottage was still asleep The Wife and I drove out to the race registration. I picked up my numbers while The Wife registered for the 5k. There may have been a total of 100 people there. None of the roads were blocked off, but there weren't any cars either. There was just a start/finish line with a timer strip in the middle of the road and then a bank of tables (for registration, medals, food, etc.) on the lawn of a high school behind the sidewalk. I grabbed a map of the course and started to wonder if I should try to memorize it. Do races this small mark the course? I didn't know, I had never been to one this small before (I later found out that, yes, they do mark them).

The race
The 5k and 10k racers all started together. In the middle of the 5k course the 10k racers split off and do an extra loop and then meet back up with the 5k course again. The Wife and I lined up at the designated time. The gun (they really had a gun) went off and the whole pack raced ahead super fast. I had a large desire to chase them down, but decided to stick to my own pace. I figured one of two things were true: 1) they were really going to stay that fast for the whole race, which would mean I had no real chance of catching them anyway, or 2) they were going to burn themselves out and I'd catch them in a few miles anyway. Turned out to be partly both. Within the first 1/2 mile I gradually started passing people. At the first real hill I passed a ton of people.

The strategy
I based my pacing primarily on my breathing effort and how my lungs felt. In run workouts I had done this before, but usually to keep myself under threshold. For this race I thought I'd do something similar, but I'd try to dance around on the threshold level and see what can be sustained, then drop the hammer and take it up to 'barf' levels around the last mile.

The miles wear on
During the second mile the 10k path split off form the 5k path and suddenly there were very few people in front of me. I saw one woman about 100 yards ahead of me. Then in the distance I saw a pair of runners. Then waaaaaaay out in the distance I saw some indistinguishable number of runners. By now we were out in very flat farm land with few trees. With no music to distract me and little else than corn to look at I slipped into a weird trance-like meditative Zen-like state where everything melted away and there was just the rhythm of my feet and breathing.

At about mile 4 I finally caught up to and passed the first woman who was in front of me. I could see that the other two runners were getting a little closer. I kept chugging along very slowly getting closer and closer to them, but unsure if I'd ever catch them. Did I just see one of them speed walk a short hill?

Barf speed
When I was about a mile out I dropped the hammer, such that one can after already going 5 miles really fast. Later on, when looking at the Garmin data my jaw would drop as I saw that I accomplished an average 7:43/mile pace for the last mile. Somewhere around 1/2 mile to go I caught up with one of the two runners and passed him. He was starting to struggle and I was starting to go even faster. I wasn't sure if I'd get the other one before the end. My body was starting to revolt - it wanted to just sit down and have a cheeseburger. I wouldn't let it, besides I couldn't see any grills around. The last 1/4 mile was mostly up hill, which turned out to be to my advantage. I was going full-on 'barf' fast and passed the woman just before turning onto the last block and sprinting to the finish line. I failed to actually barf, but I was completely spent at the end.

I won!!! Well, sorta
After cooling down, The Wife and I went over to the race result printouts and looked for our times. First, we found that The Wife had missed 3rd place (and a medal) for her age group by a mere 4 seconds. What a bummer. I'm still proud of her for setting a new PR during the race. Then we got to the 10k men's sheet and, look, I got first place in my age group! But wait, I'm the only one in my age group. Does that still count? Well, at least I got 6th place overall, but I neglected to see how many people (men and women) were in the 10k. So, it's a little funny that my best race placement ever is in a run race and not cycling. Guess I may have to start considering myself a runner if I keep this up. 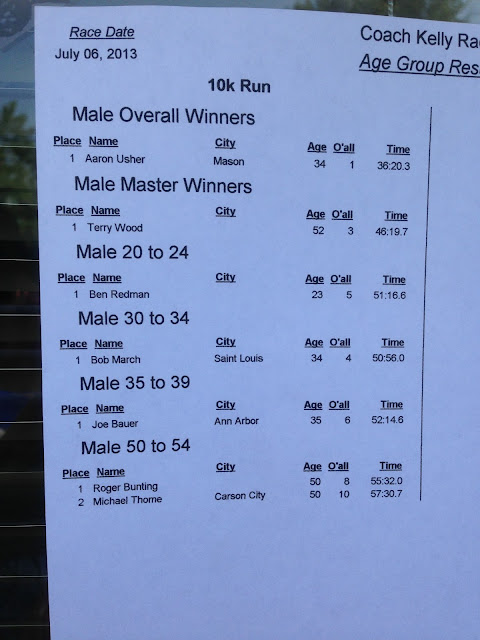