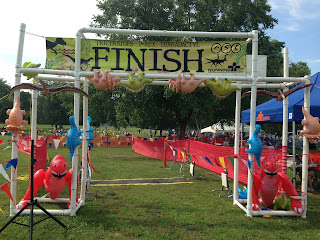 The tale of two sprint triathlons. Or, how much the bike leg impacts the overall race.

I did two of the three Running Fit dinosaur sprint triathlons this summer. I'm still relatively new to triathlons. I came to them by way of cycling and running. I'm used to pacing for both as individual events, but things change when you do swimming, biking, and running all in one event.

During the first race in July it was amazingly hot out. I felt pretty good about my swimming. I've been working on it all summer and getting much better. This was the first time I had the 'problem' of being fast enough to keep up with the main pack and jostling for position. I think I actually lost time in the first 1/4 of the swim because of that. Then on the bike I had a tough time settling into a good pace. I had the Steelhead 1/2 Ironman pace all figured out, but a sprint triathlon is much different. I eventually settled into a 180 to 190 pace. Then on the run my body didn't want to go fast, no matter what I asked it to do or how nicely I asked.

For the next race the weather was so chilly that getting into the water was actually challenging. For some reason I decided not to bring my wetsuit, but it would have been legal. This time I decided to take it pretty easy for the swim and bike portion, then go however fast my body felt for the run. Still managed to come in around 1:33, only 3 minutes more than the first race, but I felt a LOT better after completing this race than the first one. The run felt fun and not like a struggle.

In the first race I think I went too hard on the bike, but in the second race I think I went a little too easy. I feel like I'm still learning about that balance between how much effort you put on the bike leg. Ideally you put in just enough so you can do a real fast run but not end the race with any energy left.