A note from Joe: Today's post is from Debbie, who you may remember as the swimmer from the half ironman relay a few years ago. I pestered her into trying out Cyclocross and this is her account of what happened.

“You know you want to try it,” the email read. I let my cursor hover over the ‘reply’ button while I considered how to respond. My co-worker had been bugging me to check out this weird sport called cyclocross for over a year now. I love my road bike and I love my mountain bike even more. Even so, I couldn't wrap my head around the idea of jumping off a perfectly good bike so I could drag it over obstacles. But, I'm always up for learning something new.

I clicked on the ‘reply’ button and told Joe, “Alright – you talked me into it.”

The CXpreX folks are putting on a series of four clinics in Ann Arbor which involve about 45 minutes of instruction followed by a super-casual race. When I showed up for the first clinic, I had no idea what to expect. I unloaded my bike and realized two things – I was the only woman there and I was the only person with a mountain bike.

As more riders trickled in, I was glad to see a few other women and at least one other person with a heavy mountain bike in tow.  The clinic began with the instructors introducing themselves and explaining their history with cyclocross. Each instructor collected about 5 people and started working on skills. My group started off learning the best technique for jumping over obstacles. Our instructor, Adrienne O’Day explained the proper technique for unclipping from your pedals as you approach the obstacle, dismounting your your bike, hoisting your bike over the obstacle and smoothly re-mounting after the obstacle. Pretty basic stuff, but tougher than it looks (especially when your bike weighs ~30 pounds). 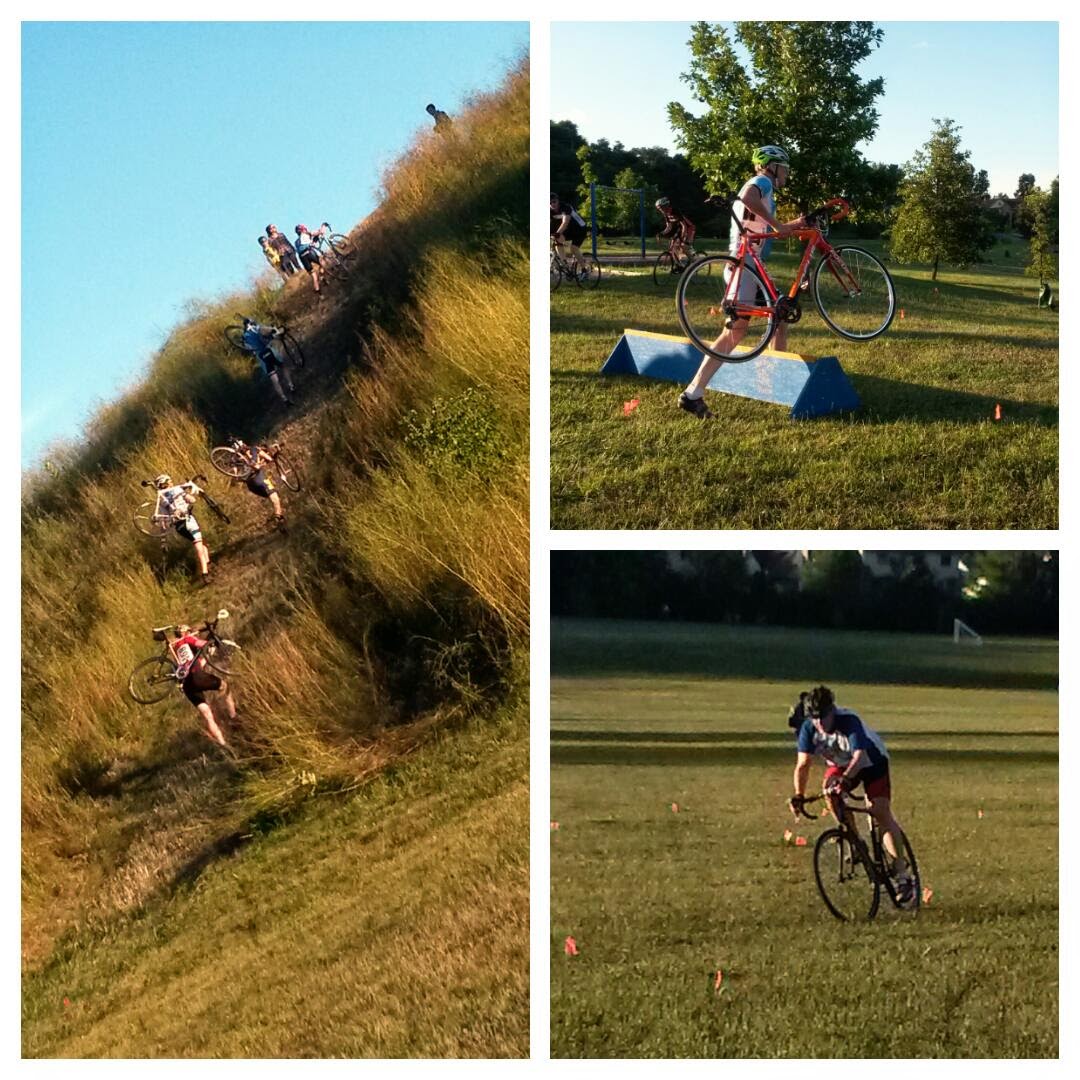 They had two types of obstacle on which to practice. The typical ones were made of wood and looked like they would hurt if you crashed into them. They also had obstacles made from PVC tubing that looked a little less intimidating. I decided to start with the plastic one. Jumping over the obstacle took me back to my days of running hurdles on the high school track team. I did a few jumps over the plastic barrier then tried the wooden one. I was feeling pretty confident about the whole thing until the guy in front of me couldn’t unclip in time and crashed hard. It looked pretty painful, so I went back to jumping over the plastic barrier.

After we practiced the obstacles, we talked about race techniques. Adrienne recommended doing a trial run of the course before every race. And with that, we all did a trial run of the course that had been set up for us at Leslie Park. I was happy to see that the path that was outlined was wide enough for two or three riders to run abreast. In other words, there was plenty of room for others to pass me. The course included a lot of winding curves, hairpin turns and one killer hill.

As I looked at the hill with trepidation, Joe told me that one race he’d participated in had involved a hill that was rideable. I decided to make use of my mountain biking skills and ride the hill instead of running up it. As I started up the incredibly steep grade, I quickly realized that my approach was laughable. Soon I was pushing my bike up a 40%* incline, sucking wind and cursing my MTB shoes that were not meant for climbing on slippery grass and dirt.

After a couple trial runs, they started the race. They had the A group of men go first (the fast guys), then the B men and finally the women (all 3 of us). Apparently you just ride the course as many times as you can until they tell you stop. (I made it through two laps and then I decided to stop and take pictures.)

All in all, the clinic was a blast. I enjoy meeting like-minded people and I got a good workout. I don’t think I’ll be taking up cyclocross racing since none of my bikes are suitable for it and I can’t see adding yet another bike to my fleet. If you tend to gauge your workouts by how much pain you’re in the next day, then cyclocross is a great workout and I would recommend giving it a try.


*Note: The post originally said 15% incline, but this was woefully underrated as you can see from the Strava data below: